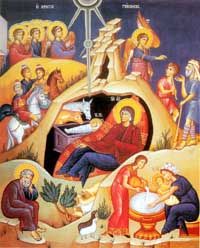 One of the most popular holy days on the Christian calendar, Christmas honors the birth of Jesus, and is observed by most Christian churches. The name “Christmas” did not appear until the eleventh century. The word comes from the Old English Cristes Maesse, which means “the Mass of Christ”.

The earliest records mention a feast held in the Church at Alexandria, Egypt, around AD 200, to honor the Nativity. The celebration of Christmas did not become a church-wide celebration until the late third and early fourth centuries. A variety of dates have been associated with the Feast of the Nativity. Western churches observed the feast on the 25th of December, while most churches in the East observed it on January 6th (Epiphany). The one exception seemed to be the Church at Constantinople, where the designated date mirrored that of the Western Church. By the end of the fourth century, almost all Christian churches had accepted the December date.

What is the True Meaning of Christmas?

Though the Church at Rome maintained that December 25th was the actual birth date of Jesus, the most likely date (according to civil and historical records) was sometime around the Jewish Feast of Tabernacles, which was celebrated in autumn. The unanimous adoption of the December date came about as an attempt by the Church to integrate Christian ideals into the Winter Solstice festivals celebrated during that season.

In the East, the Festival of the Invincible Sun was the major winter celebration. In Rome, meanwhile, the Saturnalia literally closed down the region for twelve days. As Christian missionaries ventured into Northern Europe, they were exposed to the Feast of Yule, a widespread solstice celebration for many tribes and clans. While adopting a Christian focus for these festivals, the Church allowed many of the customs and traditions associated with their older significance to remain.

Many ancient Christmas customs survive to this day. Decorations of evergreen wreaths, holly, and mistletoe, along with Christmas trees, are found in many homes during this season. Colored lights and candles are often displayed. Christmas gift-giving is an intimate time for many families. Children’s eyes light up at the mention of Santa Claus or Father Christmas. In England, the Twelve Days of Christmas are a time of great banquets, caroling throughout neighborhoods, exchanging presents, and attending parties.

Celebration of Christmas in Church

Christmas Eve services often include popular Christmas customs such as candlelight vigils, plays reenacting the Nativity from the Gospel of Luke, and hymns sung by children. Ceremonies on Christmas Day include three Masses, special readings from Isaiah and the Gospel of Luke, and elaborate hymns and carols. Many churches are decorated with candles, greenery, and nativity scenes.

For many people around the world, Christmas is the high point of the Advent season, which honors the birth of the Son of God. It is a joyous time for many Christians as they give thanks to God for His infinite love and mercy.