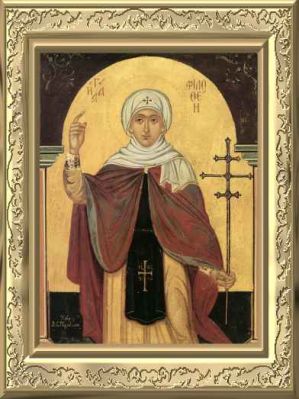 Her memory is celebrated on Feb 19.

Philothei was born in Athens in 1522 to an illustrious and wealthy family. Her parents were Angelo and Syrigi Benizelos. They had no children, but after fervent prayer her mother gave birth to a daughter whom they named Revoula, her birth name. Against her will, she was married at the age of 14 to the noble Andrea Chila, who mistreated her. When he died in 1539, she was only 17, beautiful and wealthy and her parents insisted that she get remarried. Instead, she remained at home, spending much of her time in prayer. The family wealth gave her the opportunity for charitable work, and while still a young woman she had gained the respect and love of the community.

When her parents died in 1549, Philothei found herself the owner of extensive holdings. She took up the monastic life and around 1551, establishing a women’s monastery under the patronage of St. Andrew. She took the name Philothei. There the young nuns taught handiwork, weaving, housekeeping and cooking. In this way, she prepared the young women who came to her for the domestic life.

Philothei is primarily remembered for her abundant philanthropy. The convent had a great deal of charity establishments both in Athens and on the islands of the Aegean sea. Philothei founded a second, more secluded monastery at Patesia. She also built hospices, homes for the elderly, and schools for the girls and boys of Athens. One of her more controversial activities was to buy the freedom of Greeks taken as slaves by the Tzambitis Ottomans, especially women taken to the harems. She offered shelter to the young women, some pregnant. Despite being hunted by both Greeks and Turks, she helped them escape secretly to Tzia, Andros, Aegina and Salamina, where they were safe. In a 22 February 1583 letter to the Venetian Gerousia, Philothei asked for monetary support to pay off her debts from ransom money, duties, bribes, and taxes that she owed to the occupying Turks. Her monasteries were frequently plundered, and the farming and agricultural program, which were a basic source of sustaining her work, devastated.

Four women enslaved by the Ottoman Turks in harems also ran to her for refuge. The women were traced, and Philothei was beaten and brought before the magistrate who put her in prison. Friends intervened and paid the district governor for her release. As her fame grew, so did her animosity. On 3 October 1588, four Ottoman mercenaries broke in to the monastery at Patesia during the evening vigil service and beat her severely. She remained bedridden and died of her injuries on 19 February 1589