The Lives of Sts. Constantine & Helen
Memory celebrated May 21st 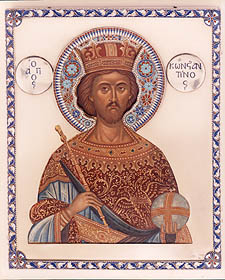 This great and renowned sovereign of the Christians was the son of Constantius Chlorus (the ruler of the westernmost parts of the Roman empire), and of the blessed Helen. He was born in 272, in (according to some authorities) Naissus of Dardania, a city on the Hellespont. In 306, when his father died, he was proclaimed successor to his throne. In 312, on learning that Maxentius and Maximinus had joined forces against him, he marched into Italy, where, while at the head of his troops, he saw in the sky after midday, beneath the sun, a radiant pillar in the form of a cross with the words: “By this shalt thou conquer.” The following night, our Lord Jesus Christ appeared to him in a dream and declared to him the power of the Cross and its significance. When he arose in the morning, he immediately ordered that a labarum be made (which is a banner or standard of victory over the enemy) in the form of a cross, and he inscribed on it the Name of Jesus Christ. On the 28th Of October, he attacked and mightily conquered Maxentius, who drowned in the Tiber River while fleeing. The following day, Constantine entered Rome in triumph and was proclaimed Emperor of the West by the Senate, while Licinius, his brother-in-law, ruled in the East. But out of malice, Licinius later persecuted the Christians. Constantine fought him once and again, and utterly destroyed him in 324, and in this manner he became monarch over the West and the East. Under him and because of him all the persecutions against the Church ceased. Christianity triumphed and idolatry was overthrown.

In 325 he gathered the First Ecumenical Council in Nicaea, which he himself personally addressed. In 324, in the ancient city of Byzantium, he laid the foundations of the new capital of his realm, and solemnly inaugurated it on May 11, 330, naming it after himself, Constantinople. Since the throne of the imperial rule was transferred thither from Rome, it was named New Rome, the inhabitants of its domain were called Romans, and it was considered the continuation of the Roman Empire. Falling ill near Nicomedia, he requested to receive divine Baptism, according to Eusebius (The Life of Constantine. Book IV, 61-62), and also according to Socrates and Sozomen; and when he had been deemed worthy of the Holy Mysteries, he reposed in 337, on May 21 or 22, the day of Pentecost, having lived sixty-five years, of which he ruled for thirty-one years. His remains were transferred to Constantinople and were deposed in the Church of the Holy Apostles, which had been built by him (see Homily XXVI on Second Corinthians by Saint John Chrysostom). 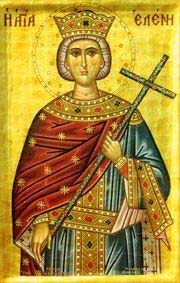 As for his holy mother Helen, she was a native of Bithynia, and a daughter of an inn-keeper. In spite of her humble birth, she married a Roman soldier, the then Roman general Constantius I Chlorus about 270. Constantine, her son – who became Constantine the Great, was born in Nish, Serbia soon after, in 272. In 293, when Constantius was made Caesar, or junior emperor, he was persuaded to divorce Helen to marry Theodora the stepdaughter of Emperor Maximian. He lived for fourteen years after the divorce of St. Helen, and when he died at York in 306 his troops at York proclaimed their son Constantine caesar.

After her son had been victorious in battle and had made the Faith of Christ triumphant throughout the Roman Empire, she undertook, in her great piety, the hardships of a journey to Jerusalem in search of the cross, about the year 325. She was advanced in years by then. A temple to Aphrodite had been raised up by the Emperor Hadrian upon Golgotha, to defile and cover with oblivion the place where the saving Passion had been suffered. The venerable Helen had the statue of Aphrodite destroyed, and the earth removed, revealing the Tomb of our Lord, and three crosses. Of these, it was believed that one must be that of our Lord, the other two of the thieves crucified with Him; but Saint Helen was at a loss which one might be the Wood of our salvation. At the inspiration of Saint Macarius, Archbishop of Jerusalem, a lady of Jerusalem, who was already at the point of death from a certain disease, was brought to touch the crosses, and as soon as she came near to the Cross of our Lord, she was made perfectly whole. Consequently, the precious Cross was lifted on high by Archbishop Macarius of Jerusalem; as he stood on the ambo, and when the people beheld it, they cried out, “Lord have mercy.” It should be noted that after its discovery, a portion of the venerable Cross was taken to Constantinople as a blessing. The rest was left in Jerusalem in the magnificent church built by Saint Helen.

After this, Saint Helen, in her zeal to glorify Christ, erected churches in Jerusalem at the sites of the Crucifixion and Resurrection, in Bethlehem at the cave where our Saviour was born, another on the Mount of Olives whence He ascended into Heaven, and many others throughout the Holy Land, Cyprus, and elsewhere. She was proclaimed Augusta, her image was stamped upon golden coins, and two cities were named Helenopolis after her in Bithynia and in Palestine. Having been thus glorified for her piety, she departed to the Lord being about eighty years of age, according to some in the year 330, according to others, in 336.