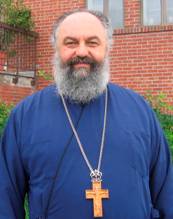 Rev. Lambros Kamperidis was born in Constantinople, raised and schooled in Athens and came to Canada in 1970, where he received his University education. Since 1990, he served as a deacon in the Orthodox Church in America the parish of the Sign of the Theotokos, Montréal, where he was ordained to the priesthood in 2000 by His Grace Bishop Seraphim. From 2001 to the present he is serving as a Rector, under the omophorion of His Eminence the Metropolitan Sotirios, the Greek Orthodox Metropolis of Toronto, first, in the church of Evangelismos (2001-2004), and from 2004 in our Greek Orthodox Community of West Island, in the church of Saints Constantine and Helen.

Father Lambros brought a new approach το service as a priest. He realized that the vast majority of our parish was third generation Greek born with limited understanding of the Greek language during the services. He also realized that there was a need to attract the younger generation and those non-Greeks who have embraced the Greek Orthodox Church through marriages and baptisms. Father Lambros provides certain portion of the services in English. His in-depth knowledge of the Orthodox religion, as well as, his general interest in theology gives him a God-given asset that helps him provide to all of us a proper guidance to our faith. Father Lambros is a great spiritual leader and brought a much needed spirituality to the Montreal West Island Greek Community

Father Lambros holds degrees in Philosophy and Byzantine History. He received his Doctorate in 2004 on the subject of the Phanariot governors of Romania during the 17th and 18th centuries. He has authored six books on theological and historical subjects, has edited a translation in English of the Selected short stories of Alexandros Papadiamandis (The Boundless Garden, Denise Harvey Publisher, 2006), and has written numerous articles in Greek, English and French, on subjects related to literary criticism, theology and history. He is teaching at the Universities of Concordia and Sherbrooke literature and theology and participates regularly as a speaker in international conferences in Europe and America.

His special interest lies in the historical moments when literature, art and theology have converged to produce significant works expressing the truths which have underpinned European tradition in both its western and eastern aspects. His publications in the main explore this theme, and include:

He is currently preparing for publication a two volume edition of Nicholas Mavrokordatos’s Treatise on Duties (Περί Καθηκόντων), which was first published in 1719. The first volume deals with the history of ‘duties’ and Mavrokordatos’s place in Romanian history; and the second is an annotated translation in French of the original work.

Concurrently he teaches courses in theology, literature and the Greek language at the universities of Concordia and Sherbrooke in Montreal.

He is married to Presbytera Christina, also a teacher and an avid beekeeper, and they have two children, Despina and Seraphim.

Watch Father Lambros in an ERT1 Show (Greek TV show) talking about Alexandros Papadiamandis during his 100th aniversarsy from his death, that was celebrated in Greece in Oct 2011

In English: All of us are children of God: How to be saved