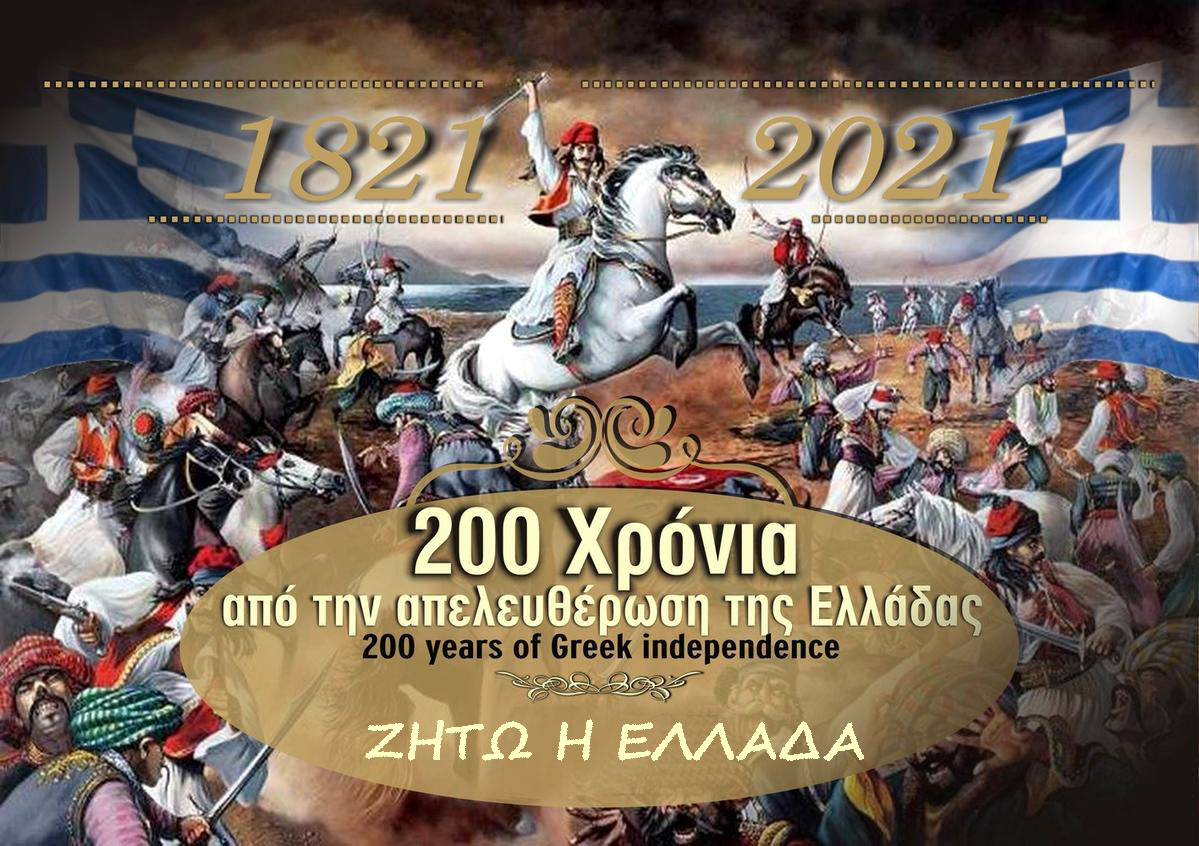 The Greek War of Independence, also known as the Greek Revolution (Ελληνική Επανάσταση, referred to by Greeks in the 19th century as simply the Αγώνας, ”The Struggle of the Greek Uprising”), was a successful war of independence waged by Greek revolutionaries against the Ottoman Empire between 1821 and 1830.

The Greeks were later assisted by Great Britain, France and Russia, while the Ottomans were aided by their North African vassals, particularly the eyalet of Egypt. The war led to the formation of modern Greece. The revolution is celebrated by Greeks around the world as Independence Day on 25 March.

Greece came under Ottoman rule in the 15th century, in the decades before and after the fall of Constantinople. During the following centuries, there were sporadic but unsuccessful Greek uprisings against Ottoman rule. In 1814, a secret organization called Filiki Eteria (Society of Friends) was founded with the aim of liberating Greece, encouraged by the revolutionary fervor gripping Europe in that period.

The Filiki Eteria planned to launch revolts in the Peloponnese, the Danubian Principalities, and Constantinople itself. The insurrection was planned for 25 March 1821 (on the Julian Calendar), the Orthodox Christian Feast of the Annunciation. However, the plans of Filiki Eteria were discovered by the Ottoman authorities, forcing the revolution to start earlier.

The first revolt began on 21 February/6 March 1821 in the Danubian Principalities, but it was soon put down by the Ottomans. The events in the north urged the Greeks in the Peloponnese (Morea) into action and on 17 March 1821, the Maniots were first to declare war. In September 1821, the Greeks under the leadership of Theodoros Kolokotronis captured Tripolitsa.

Revolts in Crete, Macedonia, and Central Greece broke out, but were eventually suppressed. Meanwhile, makeshift Greek fleets achieved success against the Ottoman navy in the Aegean Sea and prevented Ottoman reinforcements from arriving by sea.

Tensions soon developed among different Greek factions, leading to two consecutive civil wars. The Ottoman Sultan called in his vassal Muhammad Ali of Egypt, who agreed to send his son Ibrahim Pasha to Greece with an army to suppress the revolt in return for territorial gains. Ibrahim landed in the Peloponnese in February 1825 and brought most of the peninsula under Egyptian control by the end of that year.

The town of Missolonghi fell in April 1826 after a year-long siege by the Turks. Despite a failed invasion of Mani, Athens also fell and the revolution looked all but lost.

At that point, the three Great powers—Russia, Britain and France—decided to intervene, sending their naval squadrons to Greece in 1827. Following news that the combined Ottoman–Egyptian fleet was going to attack the island of Hydra, the allied European fleets intercepted the Ottoman navy at Navarino. After a tense week-long standoff, the Battle of Navarino led to the destruction of the Ottoman–Egyptian fleet and turned the tide in favor of the revolutionaries. In 1828 the Egyptian army withdrew under pressure of a French expeditionary force.

The Ottoman garrisons in the Peloponnese surrendered, and the Greek revolutionaries proceeded to retake central Greece. Russia invaded the Ottoman Empire and forced it to accept Greek autonomy in the Treaty of Adrianople (1829). After nine years of war, Greece was finally recognized as an independent state under the London Protocol of February 1830.

Further negotiations in 1832 led to the London Conference and the Treaty of Constantinople; these defined the final borders of the new state and established Prince Otto of Bavaria as the first king of Greece.